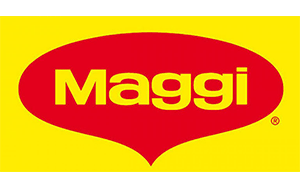 Originated from Switzerland, Maggi made its first presentation in 1886 when Julius Maggi came out with an idea to invent a flavour that would add a more tantalizing taste of the foods. As a result, Julius Maggi succeeds in creating a quick prepared yet nutritious meal to the Swiss Government, which were two instant pea soup and instant bean soup. Began from that success, Maggi started developed more recipe with an objective of bringing convenience while cooking by enhancing the cuisine taste. As Maggi expands it's brand's distribution all around the world, now Maggi has come out with a wide selection of food products which includes instant noodles, seasonings, sauces and pre-mixes. All of these are made to serve convenience to the consumer for a quick preparation meal.